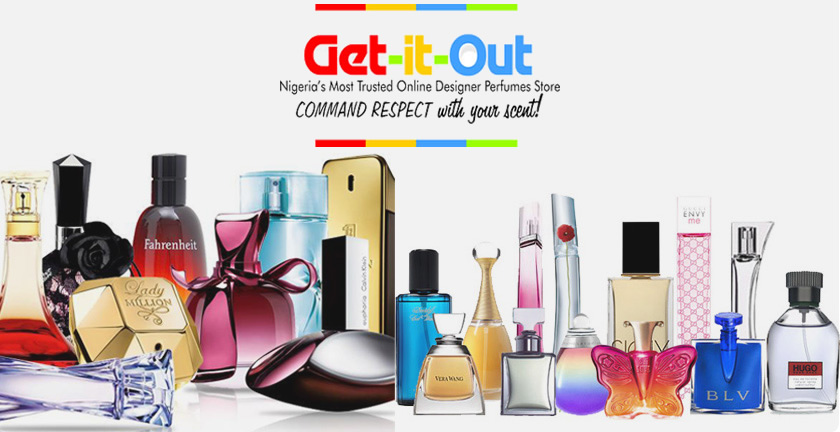 Getitout2017-07-10T19:43:52+00:00
By Getitout Shopping Perfume Comments Off on Perfume and their Fragrance Concentration

Many of us buy body fragrances without even understanding what we are putting our hard-earned money on. We see inscriptions like ‘parfum’, ‘eau de parfum’, ‘eau de toilette’ and ‘eau de cologne’, but we gloss over them; after all what we need is the content. Mr. Okeke would say: hapu ihe e dere na moto, banye moto (board the bus and ignore the inscription on the body).

There are also mists, aftershaves, and other types of fragrances available. Higher end fragrances like parfum can cost a fortune. With all the types and scents available, shopping for perfume is not always easy but it is possible.

However, talking to professionals at Get It out Online Perfume Shop will save you a lot of stress and resources.

Parfum, also known as extrait de parfum or pure perfume, has the highest fragrance concentration. It will contain anywhere from 15 per cent to 40 per cent fragrance. However, concentration is generally between 20 per cent to 30 per cent for most parfums. Of all scents, parfums last the longest; usually six to eight hours on the skin.

However, when used on fabrics, especially cotton and other moisture-absorbing fabrics, parfum can last ‘forever’, even after the clothing had been washed. A perfume freak testified: “I put Joop on my shirt, and a week later it is still there and it seems like it can’t get off.”

During laundry, some oil-based fragrances like parfum affect the water used to soak the fabric. So, don’t be surprised to feel the presence of Creed Aventus or Amouage Interlude in your surrounding after washing fabrics that had a feel of the products in question.

Parfum generally also commands the highest price of all the fragrance types due to the high concentration of fragrance. People with sensitive skin may do better with parfums, as they have far less alcohol than other fragrance types and therefore are not as likely to dry out the skin.

Eau de parfum (EDP) has the next highest concentration of fragrance. It generally has a fragrance concentration of between 15 per cent and 20 per cent. On average, EDP will last for four to five hours on the skin. On fabrics, EDPs can stay for days.

It is also generally less expensive than parfum, and while it does have a higher concentration of alcohol than parfum, it is better for sensitive skin than other fragrance types. It is one of the most common fragrance types and is suitable for everyday wear.

Eau de toilette (EDT) has a fragrance concentration of between five per cent and 15 per cent. It is cheaper than eau de parfum and is one of the most popular types of fragrance available. EDT fragrance will normally last for two to three hours on the skin. It is considered by some to be for daywear while EDP is considered nightwear. The term eau de toilette came from the French term “faire sa toilette” which means getting ready (for the day).

Originally, eau de cologne referred to a traditional recipe that used herb and citrus notes with little anchoring with base notes.

Eau fraiche is similar to EDC, in that the scent will generally last for up to two hours. It has an even lower concentration of fragrance than EDC, normally only one per cent to three per cent. While eau fraiche has a low fragrance concentration, it does not contain a high amount of alcohol. Along with the fragrance, the remainder of eau fraiche is mostly water.

Skin types of individuals also determine how long a fragrance stays on. People who have relatively unpleasant body scents may not get the same result like those with somewhat ‘pleasant’ body scents.

Visit Get It Out Online Perfume Shop and make your pick while our promo lasts. You are assured of up to 50 per cent discount.