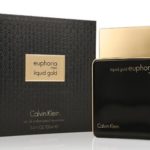 By Calvin Klein for Men

Euphoria Liquid Gold Cologne by Calvin Klein, If you’re looking for a luxurious and powerful fragrance that can be worn all day, euphoria liquid gold by calvin klein is an addictive choice for men .

Calvin Klein offers new editions of the original fragrances Euphoria from Euphoria Men since 2006 – Liquid Gold Euphoria Men for the season of 2014. The fragrances are announced as luxurious, powerful and addictive; the scents of desire melting in richness, taking you into the world of luxury.

Liquid Gold Euphoria Men is a modern woody oriental, described as intense, magnetic and masculine. This rich and modern scent uses notes of black pepper, saffron and sandalwood to create a woody fragrance that lingers behind as you cross a room, making you magnetic and intense. Wear this scent when your work day takes you into an evening that you want to make special.