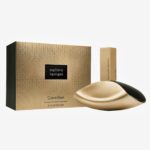 Euphoria Liquid Gold Edp
0 out of 5
( There are no reviews yet. )

By Calvin Klein for Women

Calvin Klein offers new editions of the original fragrances Euphoria for women from 2005, Liquid Gold Euphoria women for the season of 2014. The fragrances are announced as luxurious, powerful and addictive; the scents of desire melting in richness, taking you into the world of luxury.

Liquid Gold Euphoria is an oriental – woody fragrance for women, described as strong, sensual and mysterious. It contains accords of cinnamon on top, which represents refinement. Black orchid in the heart provides a touch of mystery, placed on the woody base sandalwood.

Wear this aromatic treat in the middle of the afternoon while you carefully shop for evening attire, or splash some on as you get dressed to the nines in the day’s form-flattering acquisition.

Be the first to review “Euphoria Liquid Gold” Cancel reply