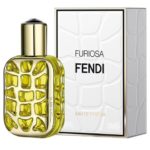 Ferrari Essence Musk
0 out of 5
( There are no reviews yet. )

Fendi launched a new women’s fragrance called Furiosa, which means “furious” and “feisty” in Italian. The perfume came out on the market in September 2014, done under the umbrella of LMVH company, and its launch is supposed to strengthen the position and identity of the brand when it comes to perfumery. Furiosa is announced with the slogan: “The Essence of Wild Femininity. The composition was developed by perfumer Francois Demachy. Accords that are contained include Calabrian bergamot in the top, wallflower (violaciocca) at the heart and amber in the base. The bottle and packaging are created by jewelry designer Delfina Delettrez, who is in the fourth generation of Fendi family The face of the perfume is model Kasia Smutniak.

Be the first to review “Fendi Furiosa” Cancel reply