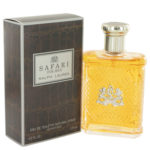 Amouage Interlude
0 out of 5
( There are no reviews yet. )

By RALPH LAUREN FOR MEN

Safari Cologne by Ralph Lauren, Launched by the design house of ralph lauren in 1992, safari is classified as a refreshing, spicy, lavender, amber fragrance . This masculine scent possesses a blend of lemon, lavender, leather, cinnamon, oakmoss and sandalwood.

It is recommended for daytime wear.

This is what the cologne smells like to me: a rugged, masculine man in a safari hat and khakis. That man could be Ernest Hemingway, Clark Gable or Gary Cooper on safari. He exudes confidence, pride, leisure and success. There is a hint of romance about him, and he is in on the hunt for the most enigmatic, alluring prey of all: woman. This cologne is romantic to me. It is by far my favorite cologne for a man. I would prefer to smell it on a well-dressed gentleman. He could be in a suit or tuxedo.

Be the first to review “Safari” Cancel reply

You've just added this product to the cart:
ValentineDeals
WhatsApp