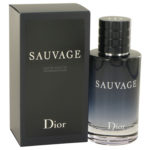 By CHRISTIAN DIOR FOR MEN

Sauvage Cologne by Christian Dior. The scent was launched in 2015 and the fragrance was created by perfumer François Demachy the notes are Bergamot, Ambroxan, Geranium, Pepper, Lavender, Vetiver, Patchouli.

Dior launches its new fragrance Sauvage, with the name originating from the fragrance Eau Sauvage from 1966, although the two don’t belong to the same collection. Sauvage is inspired by wild, open spaces; blue sky that covers rocky landscapes, hot under the desert sun.

Dior Sauvage came out in September 2015, advertised by actor Johnny Depp. It is available as 60 and 100 ml Eau de Toilette.

Be the first to review “Sauvage EDT” Cancel reply